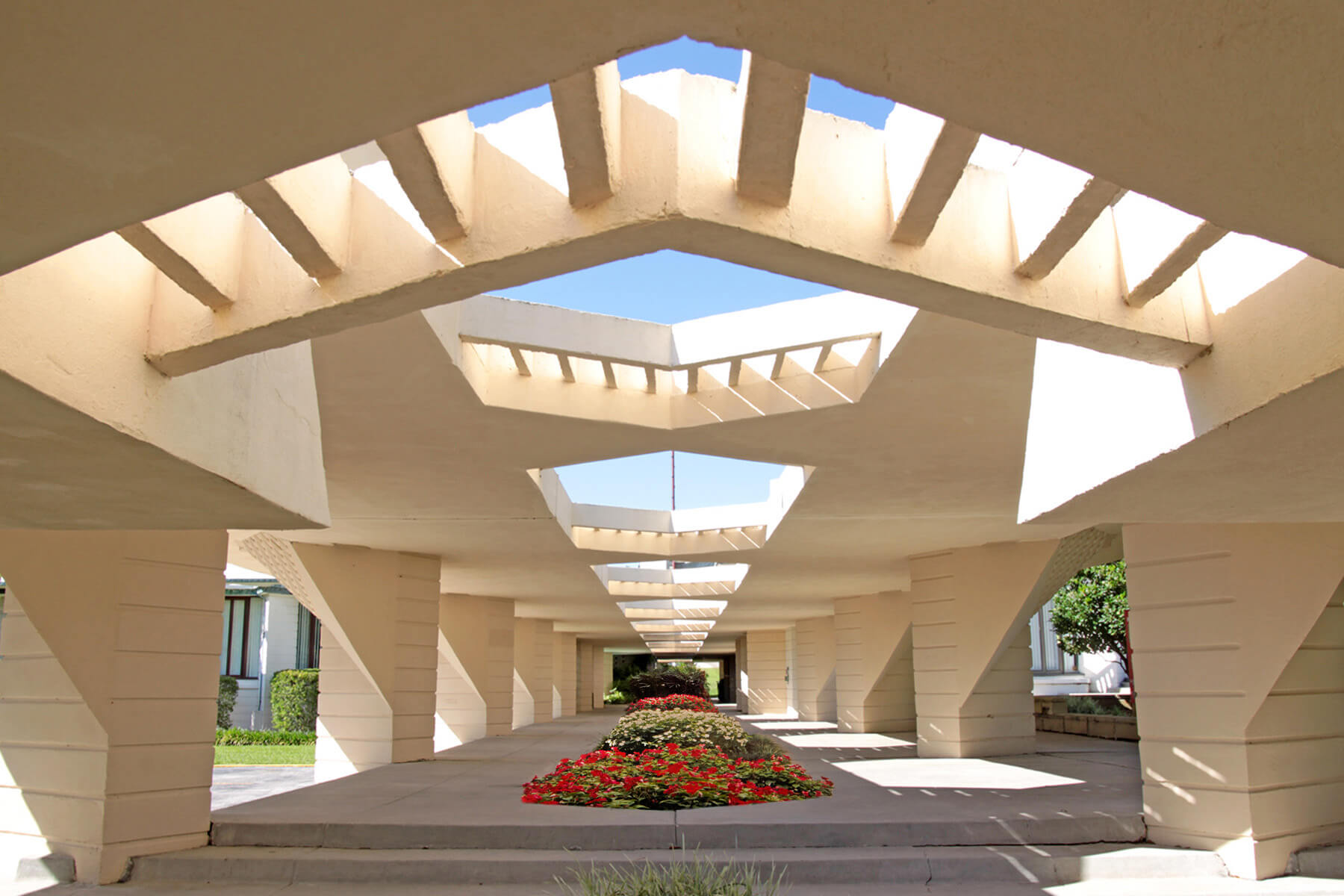 Three famed architects have their work on display in very public places in Polk County, giving local residents a chance to marvel at the success they found, inspiring others and beautifying our landscape in the process.

Their names are familiar to many: Frank Lloyd Wright, Gene Leedy and Santiago Calatrava. Let’s take a closer look at their legacies.

Frank Lloyd Wright had just finished the Fallingwater house in Pennsylvania and graced the cover of Time magazine in the late 1930s when Florida Southern College President Ludd Spivey asked Wright to design a college campus. Intrigued, Wright took on the challenge. His goal in Lakeland was to make the campus one with the earth, something he dubbed Organic Architecture.

He designed 12 buildings and structures, then used student labor to help build them. At 69 when he started the project, he oversaw much of the work himself. The first building, the Annie Pfeiffer Chapel, is chilling in its beauty, especially when light seeps through its numerous stained glass windows. Wright nicknamed the campus A Child of the Sun, where buildings would “…grow out of the ground, and into the light, A Child of the Sun.”

Walking across campus gives you a chance to roam among Esplanades, covered walkways only 6 feet 8 inches in height. The Esplanades match the low ceilings in the buildings he designed. At 5 feet 7 inches, Wright didn’t need high ceilings.

A 13th building that Wright designed was not constructed until 2013, when the college used his design to build the Usonian House. The 13 buildings are the largest single-site collection of Wright’s work and listed on the National Register of Historic Places. Florida Southern College often appears at the top of the Princeton Review’s Most Beautiful Campuses list.

Gene Leedy was the only one of the three famous architects who called Polk County home. Having built his house in Winter Haven in 1956, two years after he moved here, he remained here until his death at age 90 on Nov. 24, 2018.

Well-known in Central Florida, Leedy was considered one of the founding fathers of the “Sarasota School of Architecture.” He is known for his collection of buildings in Winter Haven, where he first designed the Sparrow House. But he’s probably best known for designing the city’s City Hall and Chamber of Commerce building, as well as his own office.

His innovative use of concrete helped ensure strength in the buildings he constructed. He was known to use a precast concrete structural system (something generally reserved for industrial buildings) in homes and offices he designed.

The 1990 chamber building showcases his use of the famous pre-stressed concrete double-T beam system. He used the same technique in a custom home he built in Mountain Lake in Lake Wales, as well as many others. The chamber building also shows how Leedy, much like Wright, used the environment to his advantage. When people protested building the chamber building in a downtown park, Leedy proposed letting the park run through the building, which is why the bottom is open.

He often incorporated enclosed courtyards, flat roofs and sliding glass doors in his designs, all of which were included in the Winter Haven City Hall when it was built in 1960. Some of Leedy’s signature work has since been overtaken by offices, but the aluminum framed sliding glass doors he invented once were the talk of business people who gathered in the natural setting Leedy created.

Leedy’s work lives on in The Leedy Lifetime Works Tour, which was developed by Main Street Winter Haven. Brochures and audio are available for the self-guided tour.

Santiago Calatrava is known worldwide for his bridges, museums, opera house and other unique structures. But he became a household name in Polk County in 2009 when he was selected to develop the master plan for Florida Polytechnic University, the Sunshine State’s 12th public university.

Like Wright and Leedy before him, Calatrava took Florida’s landscape into consideration when designing the college campus on 170 acres along Interstate 4 and the Polk Parkway. He combined small lakes and used it as the centerpiece for his master plan, locating the 162,000-Square Foot, two-story, easily recognizable Innovation, Science and Technology Building along its shore.

Providing natural light and views of the lake were important to Calatrava, who created the university’s master plan to highlight “the important role that the landscape, vegetation and water play in Central Florida,’ according to architravel.com.

The architect also built several uniquely Calatrava features into the building, including pergolas and arches. He also used skylights. One sits under aluminum louvered roof system that can be adjusted, depending on the position of the sun, to allow more or less light through.

Local architects appreciate the work of those who came before them.

“Each architect was afforded an opportunity at different times of their career to be a part of the fabric of Polk County and found it to be a beautiful community and environment with tremendous potential,” said Jerry Trout, Senior Principal of Straughn Trout Architects in Lakeland.

Brad Lunz, president of The Lunz Group, said he’s proud to work in an environment where architects thrive.

“Each man brings his own distinct style to Polk County, and we are lucky to be able to admire their work on a daily basis,” Lunz said. “Many young architects are inspired by their innovation and the way they used the environment as part of their masterpieces.”

“I can only image that they both saw the area as a blank canvas of opportunity for their work. It is easy to understand why Wright would be inspired to articulate a college campus master plan within the landscape of orange groves fronting Lake Hollingsworth,” Hoeft said. “Calatrava was likely equally captivated by the open landscape and climate for his campus as he was in the idea of developing a STEM focused learning community that promises to foster creative thinking individuals like himself.”