Agriculture has long played a part in Polk County’s history, and with the next generation of farming families taking over, along with new blood entering the realm, it will likely stay that way for decades to come.

But agriculture involves so much more than farming. In fact, the Agriculture Council of America (ACA) includes “leaders in the agriculture, food and fiber communities dedicated to increasing the public awareness of agriculture’s vital role in our society,” according to its website. ACA works to raise awareness each year on National Ag Day in March.

About 626,000 acres in the county are designated as ag land, making Polk the second-largest county in the state in terms of farmland. Ag-related businesses account for about 30 percent of our jobs and 30 percent of the $6 billion in gross regional product. 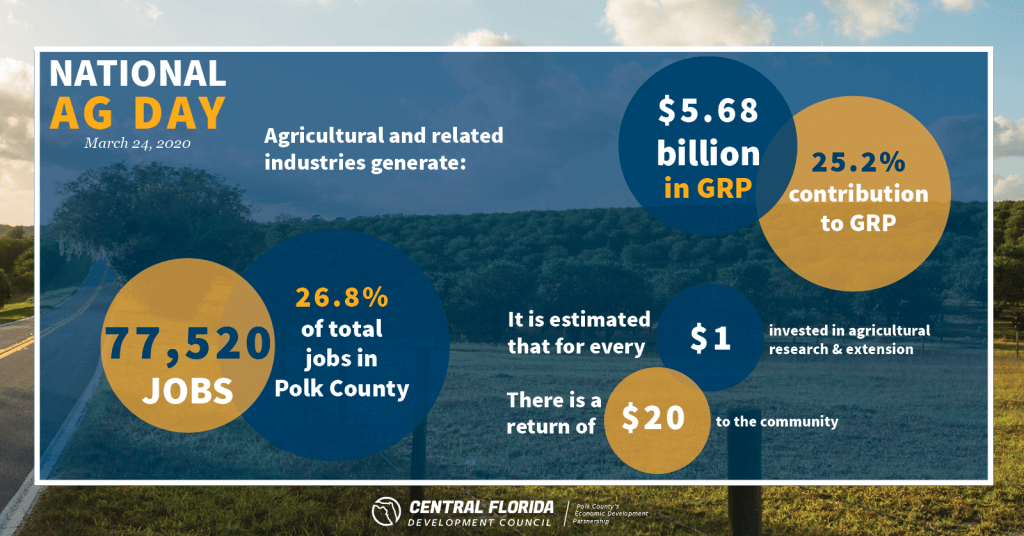 As of 2017 – Information from UF/IFAS Polk County

In Polk County, the Farm Bureau and many others work to spread the word about agriculture. Executive Director Carole McKenzie said its programs, such as AgriFest, which invites about 6,000 fourth graders to learn about agricultural commodities, remain popular. Sponsored by Florida’s Natural Growers Foundation and The Mosaic Co., the 10-day program introduces students to everything from beekeeping and aquaculture to citrus and blueberry farming. That introduction is attracting interest beyond multigenerational farming families, mostly in Future Farmers of America (FFA) chapters.

“Some of the most phenomenal students don’t necessarily have an ag background,” McKenzie said. “They just find a passion for it and really, really excel. One in particular who won the state youth speech contest several years ago has gone on to be an international ambassador for ag, traveling to different countries.”

The 20 or so Polk County schools’ ag academies, everything from iGrow at Bartow High to Agritechnologies at Auburndale High, are very popular and successful, McKenzie said.

The School District is one of the Farm Bureau’s AgriFest partners, and McKenzie said they work together to follow district standards, such as with vocabulary words students will see in science classes in fifth grade when designing the AgriFest curriculum.

“We incorporate that terminology. We also talk about careers, not only from the aspect of whether you’re a farmer, rancher or producer but from the aspect of a research scientist. Citrus and every commodity, what they are facing takes a tremendous amount of research. There’s a biologist, marketer or broker, so many different careers that go along with ag.”

The younger generations of multigenerational farming families — those ages 18-34 — are using technology, apps and social media more so than their ancestors. “They are much more in tune with technological advances, but that does not necessarily remove them from the multigenerational family business.”

Kyle Story, a fourth-generation farmer and past president of the Farm Bureau, says agriculture is the backbone of many Florida communities.

“Polk County is a leader in citrus production and processing along with being a large employer where many families have worked together for generations,” said Story, president of The Story Companies. “We continue to mentor and participate with new varieties and scions to produce the best crops in the world. Many citrus growers are harvesting the best crop in almost a decade, which leads us to believe we can continue to work hard every day with rewards for that hard work.”

Farmers must be optimists every day, even when facing challenges, he said. “I am proud to be able to be a part of a four-generation-old business that is always looking to better themselves for the next generation.”

The agriculture sector in Polk County goes beyond farming to include the flavors industry, phosphate, food processing and more.  And it’s heavily involved in STEM, with testing autonomous equipment and robots to pick citrus and berries, drones to monitor crop production and more.

Companies like Firmenich and Givaudan, which provide flavors — often by-products from citrus — for everything from Cheerios to perfumes, cosmetics and laundry products, are growing. The University of Florida’s Citrus Research and Education Center remains a key player here, helping to fight the citrus plague called greening. The Florida Department of Citrus, a statewide agency, and Florida Citrus Mutual are also located in Polk County.

Companies like Mosaic and Arrmaz, described on its website as a “global leader in the production of specialty chemicals for the mining, fertilizer, phosphate, industrial ammonium nitrate, asphalt, and oil and gas industries,” contribute to the ag cluster in Polk County, where the Florida Fertilizer and Agrichemical Association is based as well. 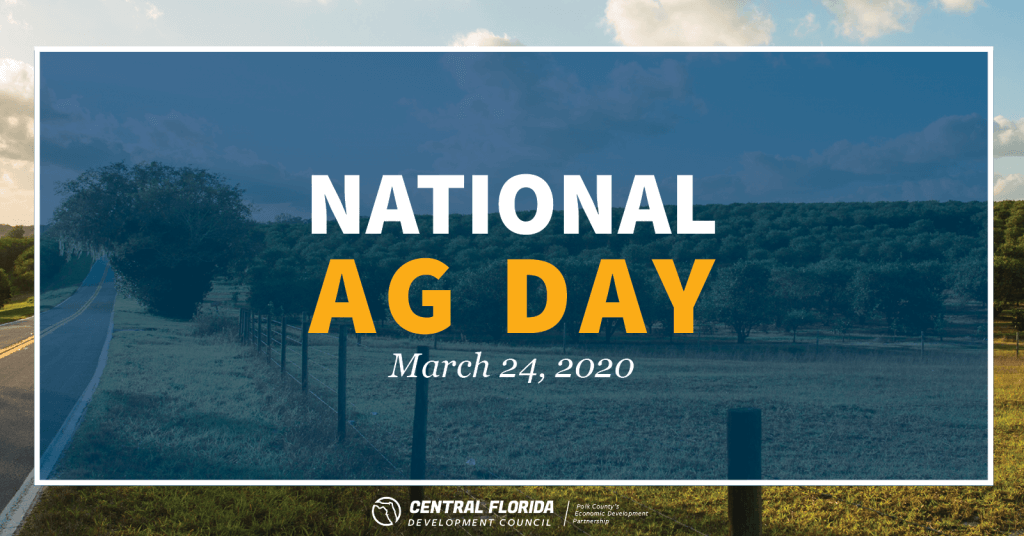