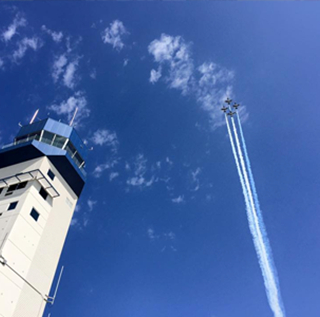 Polk County’s four airports generate an annual economic benefit of $1.8 billion, but they’re not the only ones contributing to growth in that arena. Manufacturers of components used by aerospace companies and NASA also contribute millions more.

In 2020, aviation and aerospace produced $41.5 million in GDP for Polk County, according to a JobsEQ report prepared for the Central Florida Development Council (CFDC) by Chmura Economics & Analytics. That segment has seen an average annual percent change of 8.8% since 2010, eclipsing the national average of 3%.

“GDP (gross domestic product) is the most comprehensive measure of regional economic activity, and an industry’s contribution to GDP is an important indicator of regional industry strength,” the report says.

“Aviation and aerospace are part of the growing segments in our economy, most likely enabled by the local talent created at Florida Polytechnic and other local universities, plus the benefit of the close proximity to the Space Coast,” said Javier Marin, vice president of Business Development at the CFDC.

Aviation and aerospace employ about 500 people in Polk County at an average salary of $47,300, according to the report. Both numbers are increasing. The top industries are flight training and support activities for air transportation.

The number of aviation and aerospace businesses in Polk County has increased from 24 in 2010 to 42 in 2020, the report says. “New business formations are an important source of job creation in a regional economy, spurring innovation and competition, and driving productivity growth,” it says. “Establishment data can provide an indicator of growth in businesses by counting each single location (such as a factory or a store) where business activity takes place, and with at least one employee.”

“What these companies have in common is that they foresaw opportunities and subscribed to advanced manufacturing technologies early on,” Marin said. “This vision is what gave them the edge and opened the doors for them to become suppliers to companies like Blue Origin and SpaceX.” Blue Origin is an aerospace manufacturer and sub-orbital spaceflight services company; the more known company, SpaceX, designs, manufactures and launches advanced rockets and spacecraft.

The airports’ contribution to the county’s economy is significant. Lakeland Linder International alone has an economic impact of $1.5 billion, according to a 2021 study by Kimley Horn. In addition to upgrades and additions the city has undertaken, it has attracted three major tenants in the last few years: Amazon Air, Draken International and the National Oceanic and Atmospheric Administration, which brought the Hurricane Hunters to Polk County.

“This level of economic activity brings high-skill, high-wage jobs to our communities and enhances the quality of life for our residents,” said Lakeland City Manager Shawn Sherrouse.

The airports host about 700 aircraft operations a day on runways longer than 4,000 feet, mostly in ideal weather conditions and at costs lower than Tampa and Orlando.

Amanda Kirby, Lake Wales airport manager, knows her industry helps attract other industries and visitors to the county. “Aviation is important for economic growth because it creates jobs and facilitates tourism and local business. It also provides a lifeline for communities and allows for rapid disaster relief when needed.”

Four airports in Polk County, joined by other aviation and aerospace interests, provide a $878 million-plus local impact, according to the March 2019 Florida Statewide Aviation Economic Impact Study conducted by the Florida Department of Transportation.

That number more than doubled from the $400 million impact in 2014, a reflection of the aviation industry’s growth in Central Florida.