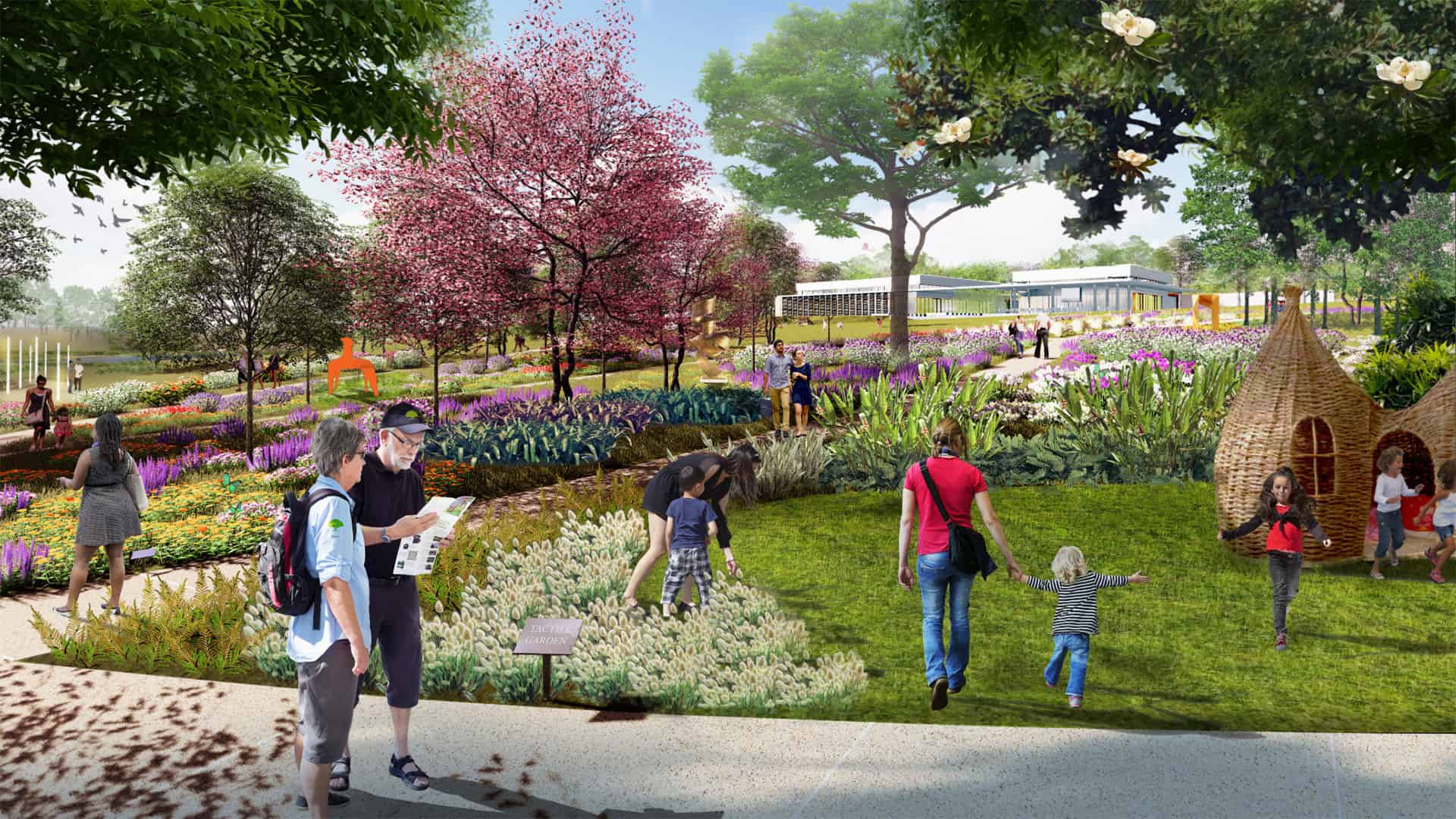 Bonnet Springs Park, a 180-acre, $110 million park on the outskirts of downtown Lakeland could be a game-changer, connecting the northwest quadrant of the city with a flourishing downtown.

“We are trying to move the footprint of Lakeland west and connect the park to downtown,” said Bill Tinsley, retired parks director for the city of Lakeland who is now serving as CEO of the park. “We think the northwest quadrant of the city is the lowest economic area of the city. Kids here have the least chance,” Bonnet Springs is being developed on reclaimed land at George Jenkins Boulevard and Kathleen Road.

Living and playing is an important part of our daily lives. This blog post is one in a five-part series about quality of life in Polk County — beyond jobs.

Why a New Park

Tinsley said making lives better was the attraction for him and a big reason why Barney and Carol Barnett, whose grandfather founded Publix Super Markets, have committed the millions of dollars spent to date buying the land, remediating it and preparing for construction.

“We are going to change lives on Memorial Boulevard and Wabash. We’ve seen it already in adjacent neighborhoods in terms of property values (increasing) and development opportunities.”

But, it’s more than just the park that could help; the group behind the Bonnet Springs Park also purchased 26 acres from Florida Tile, which left the land vacant 26 years ago. Because it’s designated as a brownfield, which carries the perception that it’s contaminated, no investor would purchase it, Tinsley said.

“We removed all the contaminants and are building a 6-foot high berm with a 12-foot bike path,” Tinsley said. The group will sell the site to someone who will develop into housing, preferably condos and townhouses with a parking garage on the bottom, at last, 1,500 residents, and retail, he said.

“We have interested buyers right now,” Tinsley said. “One hundred percent of the profit from the sale will go to support the park. It’s a game-changer.”

Tinsley, who will re-retire when Bonnet Springs opens in 2021, said he and others involved in the project do it because they love the concept and the park. They hired Sasaki of Massachusetts, the firm that just finished the Chicago Riverwalk in 2016, because, like that project, Bonnet Springs Park is “taking a real negative and turning it into an asset,” Tinsley said. “The whole philosophical thing was a good thing for what we were going to do. You can pick up this park and put it in Boston, New York, Atlanta and make every one of those cities better. This is a different park, an urban asset.

The Friends of Bonnet Springs Park is reaching out to the community in an advocacy role and, so far, 400 households have become Friends; they would like 2,000 by the time the park opens.

Some of the five buildings that will be constructed are very technical, Tinsley said, like the 40,000-square-foot building that will house Explorations V Children’s Museum. That anchor building will have five rooms that will take three months to build — after the walls are put in.

Explorations V attracts about 40,000 visitors a year at its downtown Lakeland site, but the retrofitted building has no front yard and parking restrictions.

“Here, they will expand the square footage and have parking and the ability to integrate programming with the outdoors. Their attendance will shoot through the roof.”

CEO Kerry Falwell said she hears from members and families that an outdoor exhibit is missing from the current location.

“As much as we love our building in downtown, we are not able to meet the community’s needs here. Bonnet Springs Park is opening up a whole new world of possibility to Explorations V as we continue to inspire curious explorers. We are honored to play that role.”

She said the park will plant the seeds of curiosity in those who visit and help the museum build future innovators, leaders, parents, teachers and more. Collaboration and access to arts education are also critical, said Falwell, who has been CEO of the museum for two years.

“We are preparing kids to lead a world that hasn’t been invented yet.”

The park also will include: