Madrid CPWG is now a full-service, one-stop-shop, competing with other engineering firms in a cooperative and professional way, Madrid said.

“That’s what we’re all about. We can work with them, where we can, and team up with some of the other local companies to go after work together,” Madrid said. “Where we have something they need, and they have something we need, we’ll be much stronger than other folks who are out of the county.”

Madrid founded MEG as a geotechnical engineering company in 1992. That’s still half the company’s work, but now the company is a general civil engineering firm with offices in Tampa, Bartow, Oviedo, Jacksonville, Blountstown and Chipley.

“Now, if somebody wants to develop in Polk County, we can give them a site plan, survey the site, give them elevation maps and drainage maps, and then we can design a retention pond and permit it with the water management district. We can even do some environmental work like delineating wetlands on a site. We will make sure all agencies can approve that development,” Madrid said.

Right now, it’s working on the new VA clinic being built near the Polk Parkway in Lakeland.

“We are working with a civil engineering company and architectural company that will design that facility. We’re just doing geotechnical engineering — designing foundations for the building and parking lot,” Madrid said. “It doesn’t sound like a big deal; normally you put asphalt over the soil. But this is mined land with soft soil, so we are doing a lot of work just for the parking lot.”

The company includes engineers in a variety of specialties like structural, transportation and landscape engineering, he said.

Madrid’s favorite project was one CPWG was involved in before the merger but finished afterward: The Complete Streets project on Dillard Street in Winter Garden.

The engineering definition for Complete Streets refers to having more than traffic lanes, he said. “You also have parking, some bicycle paths, pedestrian areas, and safely separate the different modes of transportation. Cyclists love to have bike paths that are really well marked, even a higher elevation than the road. It minimizes fatalities and increases safety.”

The project also included a landscape architect who developed rain gardens, which use various plants to filter water before it goes into the stormwater system. That helps enhance the environment, he said.

“Because we were redoing drainage and traffic patterns, we really required a little bit of each of the things we do. It was very successful. The city loved it. It beautified the streets.”

The company is also helping with the construction of the Summit Building along the shore of Lake Mirror in Lakeland. They are providing foundation engineering, materials testing and threshold inspection for this project.

Madrid is proud of the new company, which he said is “so much broader and provides so many different types of engineering capabilities, we now have a much bigger market we can go after and help people in many different ways. I’m really proud of that. That’s what the merger allowed us to do.”

Madrid is proud that his company is known as innovative, which helped it win a Project of the Year award from the Ridge chapter of the Florida Engineering Society. That project entailed fixing a problem with West Eloise Drive south of Winter Haven settling about once a decade since it was constructed in the 1940s. 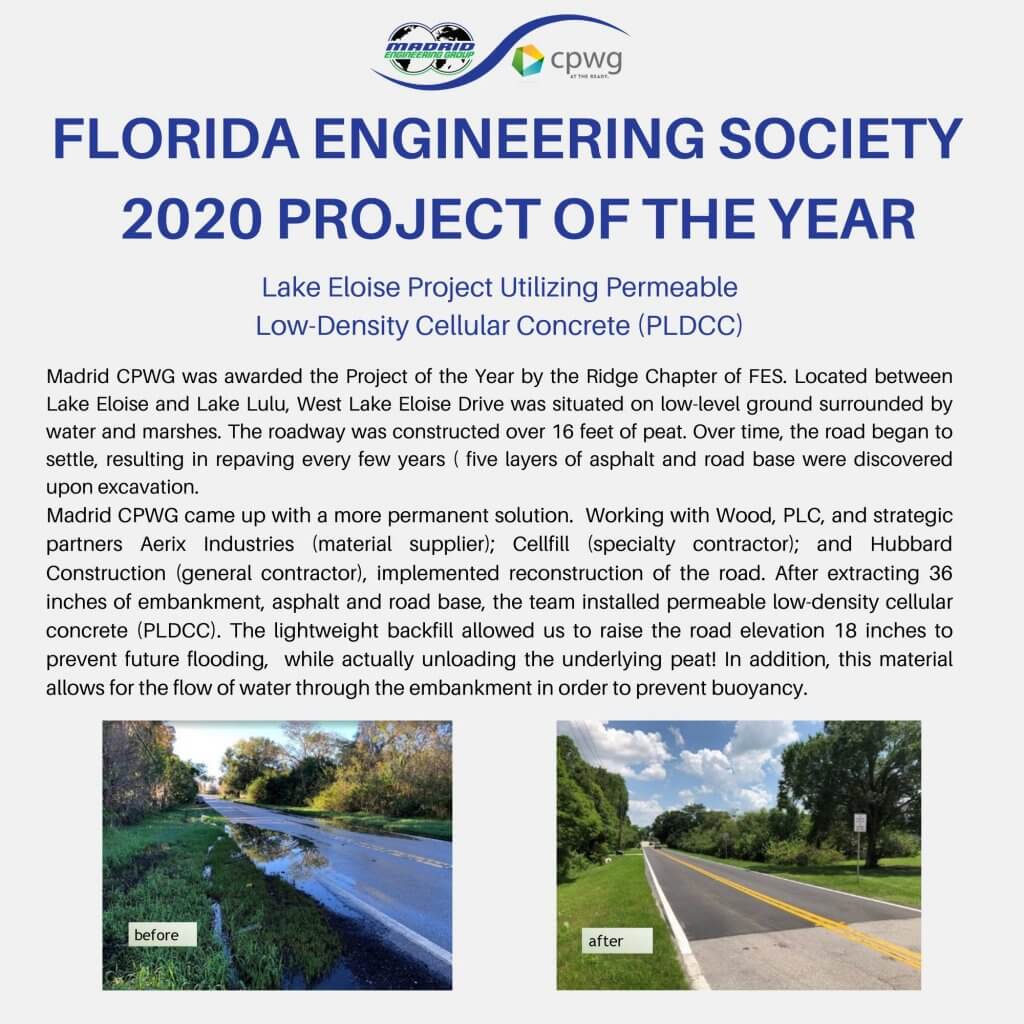 “When we dug out the embankment, we found a half dozen layers of asphalt. They had repaved over and over again,” Madrid said. More asphalt meant additional weight on top of a soft peat layer, causing settling.

The company used a lightweight, permeable, low-density cellular concrete — the first company to use it in the state, Madrid said. “It not only raised the elevation of the road 18 inches (to avoid flooding), but now it weighs less than it did before. It’s not going to settle anymore.”

Madrid credits the innovative spirit for solving the problem. “Being able to look outside of the box and say, ‘What we did before we can’t keep doing. What is the right material to use in this situation? What’s the best solution?’ “

When MEG merged with CPWG and acquired Pavement Management Group, it gained expertise in evaluating the condition of pavement to determine when roads should be repaved. “If you optimize that, cities end up saving hundreds of thousands and millions of dollars, depending on how extensive the roadway is. It’s making the most out of taxpayer money, stretching the dollar.”

One of Madrid’s goals is to become one of the top transportation engineering companies in the state. “We want to provide value in road construction. It all starts with engineering and materials optimization.”