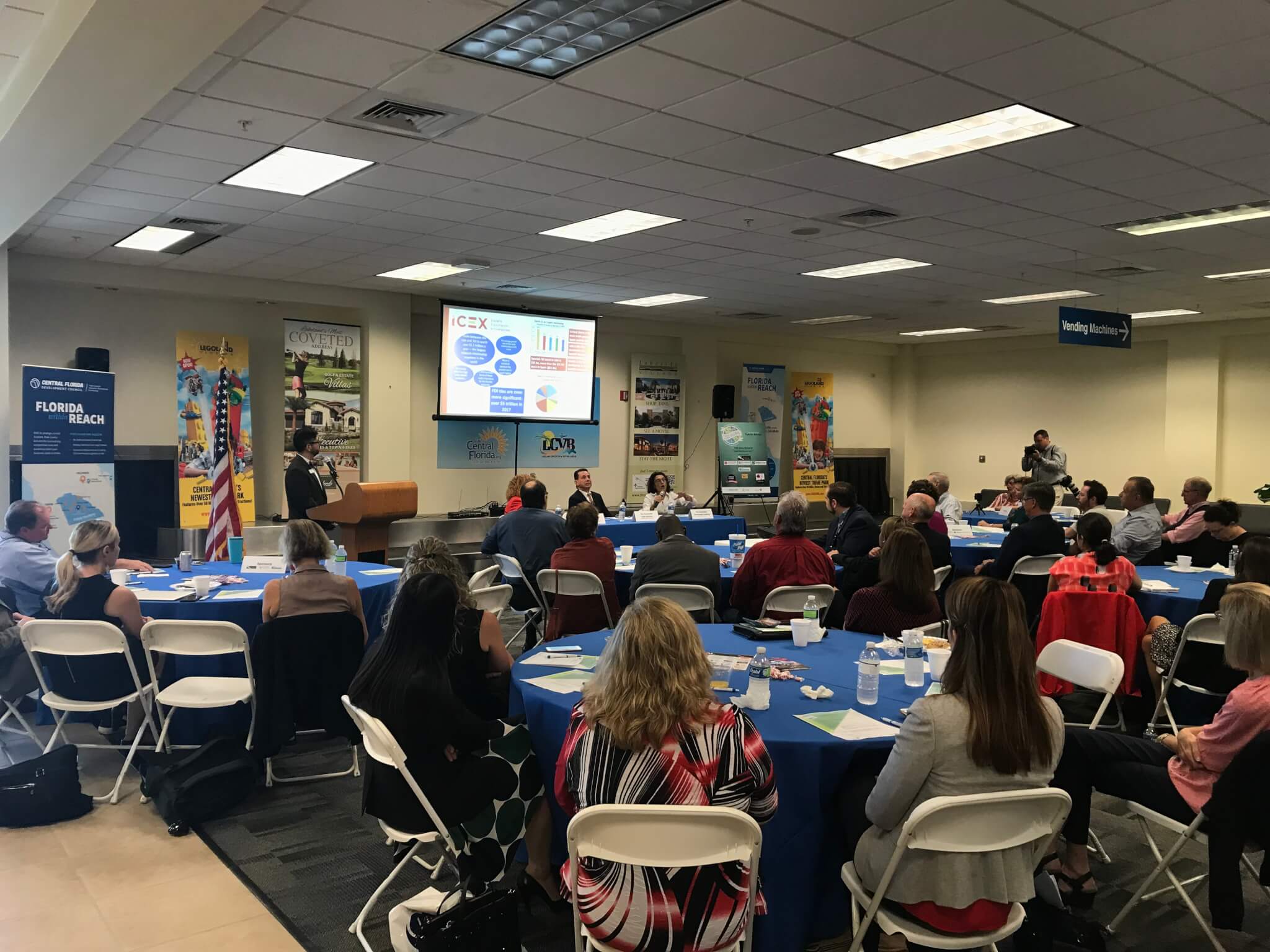 Central Florida is one of the most important trade communities in the world, and it’s in a unique position to benefit from ongoing conversations on the topic, said Bill Lane, executive director of Trade for America.

“Whether you’re on the right or left politically … on things that are really important to your community, you point it out, you communicate,” Lane said at the Polk Goes Global IV symposium on tariffs and their impact. “The great thing that’s going on right now is everyone in this room” is talking about trade.

Trade includes imports and exports, everything from goods and services to innovations and employees.

“Any time we have tourists here, it shows up as an export. When they go to Costco and get good deals, they buy things to take home, which is an export,” Lane said at the Nov. 9 event at Lakeland Linder International Airport. The symposium, the fourth, was sponsored by the Central Florida Development Council and the Lakeland Chamber of Commerce and the Greater Winter Haven Chambers of Commerce.

Polk County is perfectly situated in the middle of the state — with access to ports, highways and two airports — to take advantage of international trade, said Corey Skeates, president of the Lakeland chamber. “We are Florida’s belt buckle.”

Inke Sexton, a process manager for Givaudan Flavors Corp., which makes flavors for almost every food and beverage in the grocery store, said Givaudan in Lakeland is not as affected by tariffs, but other locations in her company are, and it’s getting expensive.

A lot of raw materials are being bought in from China, the only place they are being produced, Sexton said. The 15 percent to 25 percent tariffs end up in the grocery store, and consumers pay for them.

In addition, smaller companies are having problems paying for the tariffs, she said.

Trade and tariffs have been in the news this year as President Donald Trump has imposed tariffs on several trading partners, infuriating them and prompting them to retaliate with tariffs on U.S. products. High tariffs hurt trade, Lane said.

Susan Harper, consulate general of Canada in Miami, said the United States exports more goods to Canada than to the United Kingdom, China and Japan combined. “It’s often (hard) to know you are … talking to or doing business with a Canadian,” Harper said. “Canada is Florida’s most significant partner.”

“We should minimize politics so business people can cross the border with almost no barriers,” Harper said.

The Trump administration said it imposed tariffs on Canada because it considers our northern neighbor “a national security threat,” Harper said. “We do not think we are a security threat to the United States.”

Canada did what other countries have done. “We think these are improper tariffs. We retaliated. This is how the game is played. It’s costing you more money.”

Harper said the administration’s tone has caused a chilling effect. “We need to increase stability,” she said.

Lane agreed, saying trade works when there is “peace and understanding. When you do it in the wrong way, it has the exact opposite effect.”

There’s a way to bring China along, Lane said. “You have to bring your allies together. No one else has put tariffs on Chinese goods.”

Felipe Cuellar Sanchez, with the Mexican consulate in Orlando, said last year, the United States exported $243 billion in products to Mexico, while Mexico exported $314 billion to the U.S. “Mexico is still a top trading country with the United States.”

Like others, he said tariffs add 5 percent to 7 percent to the costs of products. “There is no doubt that any tariff will affect the final consumer.”

Inmaculada Gutierrez, trade commissioner of the Embassy of Spain at the consulate of Spain in Miami, said Spain buys everything from medical devices to airplanes from the United States. But foreign investment in the United States trumps imports, she said. The Foreign Direct Investment — an investment a person or company from one country makes in another country — was $5 trillion in 2017, she said.

A recent foreign investment in Polk County has put people to work in local jobs, in addition to new capital investment, said Javier Marin, the CFDC’s director of business development and global trade.

Alice Ancona, director of international strategy and policy for the Florida Chamber of Commerce, has been working on international trade since her position was created in 2013 following research on the topic. She advocates for trade at the federal and state level, focusing on three areas geared toward Florida in 2030:

“Part of looking at international trade, we are a $1 trillion GDP (gross domestic product) economy,” Ancona said. “We would be the 17th-largest economy (in the world) right now.”

Florida now trades with more countries than it did in 2014, adding Mexico to the list, bringing in exports through ports, not just by truck, Ancona said. It also trades extensively with Canada, the United Kingdom and Germany, she said. “These are high-end exports that we make,” including medical devices.

Florida is the gateway to the world, especially South America. “Brazil is our No. 1 export destination,” she said.

Trade with Canada and Mexico has increased 290 percent since 1993, Lane said. Ancona said that 50 percent of consumer goods sold in Mexico are manufactured in the United States.

This year, Florida will export $42 billion in products we make (it also exports products from other states that are not included in this number).

As of July, tariffs will have an estimated impact of $2.2 billion, Ancona said, which has forced us to change. “We diversified who we trade with,” she said. Canada, for instances, trades services as well as goods with Florida.

Retail tariffs have hurt the agriculture community, Lane said, and that must change.

Students in a Global World

Companies that come here are looking for “a talented, educated workforce” — the No. 1 interest, Ancona said. Florida universities are graduating a lot of students who are available to work for international companies that want to locate here.

A lot of foreign students come to Florida to study, paying the higher out-of-state tuition rate, but some are now wondering whether they will be welcome here, Ancona said. In fact, some are now going to Canada. That hurts the United States.

International students are one of the most-important clientele, Lane said. They go back and talk positively about our country.

With more than a half-dozen colleges and universities, Polk County plays a role in international students — either teaching those from other countries or preparing Americans to work overseas.

Dr. Angela Garcia Falconetti said Polk State is globalizing its campus, including offering more and more study-abroad programs, which help prepare students — especially those who graduate from the aviation program — for international positions. 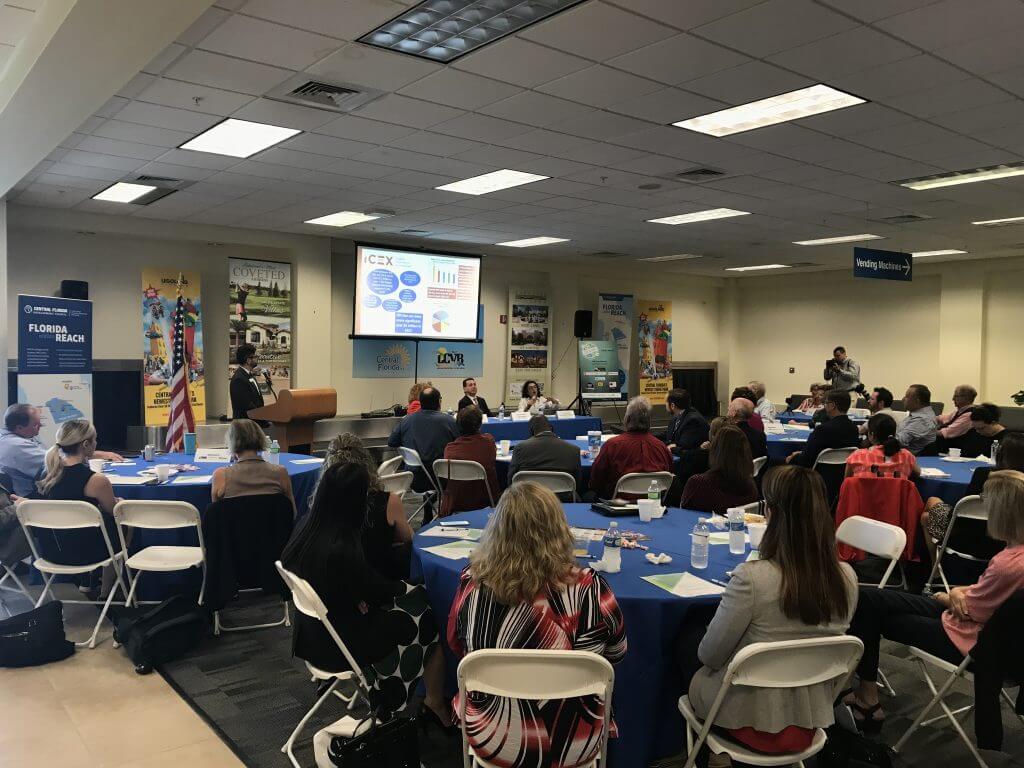