If Polk County wants to play on the world stage, it has to think globally. And that’s exactly what’s happening as part of the Central Florida Development Council’s Polk Global Trade Alliance initiative.

About a year old, the alliance “aspires to be the prime catalyst for the growth of international trade in Central Florida, and to make global initiatives an intrinsic part of Polk County’s broader regional economic development strategy,” according to Javier Marin, who oversees the alliance for the Central Florida Development Council.

As part of the initiative, Marin and five others attended the Farnborough International Airshow in Hampshire, England, for three days in mid-July. The airshow is billed as the “most important aviation industry trade show of the year.”

Aviation is a growing industry in Polk County and Central Florida, which is what attracted those who attended:

“Our No. 1 priority is to foster the business opportunity for local businesses, whether they find those opportunities domestically or abroad,” Marin says. “What we try to do when we do these type events is build relationships and share our location assets.”

Bruce Lyon echoed that, adding new relationships could lead other companies “to invest or create jobs at the Winter Haven airport, as well as potentially to create jobs and value at the Intermodal Logistics Center at the CSX terminal.”

He said attending a trade show like Farnborough with the CFDC, Polk State and the private sector brings “additional value and synergy. We leverage their relationships — we all have different relationships. It’s more than just going — you have to build relationships. You have to go once, twice, three times. They have to look you in the eye, shake your hand, understand your commitment. The credibility of the delegation from Polk County is exceptionally valuable. We wanted to add to their credibility and benefit from it.”

Follow-up work after the trade show is when business gets done, he says.

Eric Crump agrees with Lyon, saying it’s critical to have various elements represented on such trips.

“Our business partners introduce the college to companies and high-level executives that we would otherwise not have access to,” Crump says. “In turn, we provide our business partners a huge advantage when marketing this area to aviation businesses. It’s all about partnership done right. We all win.”

Growing the economy and workforce training complement each other,.

“When our industry base grows, so does the need for qualified men and women to take on careers,” he says. “Partnering with our local economic development agencies on trips like Farnborough makes a ton of sense because our community partners can speak intelligently about incentives and reasons to relocate or expand aviation businesses in Polk County, but Polk State College is there at the table to immediately answer that super-important question: ‘Where is the workforce?’ ”

Was the trip successful?

During eight or so meetings, the delegation established relationships, Marin says. “We don’t expect opportunities immediately. It takes time and the conversation has begun.”

Trade and business activities take longer, especially when working internationally, he says. “We have to start by building trust among different organizations. We will probably see fruit in two to three years. What we need to make sure and do today is promote Polk County because that’s one of our primary deliverables from the standpoint of the CFDC — domestically and internationally.”

He says it was important to partner with local, state and regional partners. Enterprise Florida, for instance, provided a key lead for a meeting at Farnborough.

He said initial conversations with other attendees as they were departing was positive. “We were happy with the fact that we were there for three days and had the meetings we had, and we touched all the different sectors we wanted to touch — business, EDOs (economic development organizations), education. In terms of who and what, we felt we did the right thing. We will be able to tell … when something produces results we were looking for in the long term.”

Lyon said the delegation renewed some existing relationships and developed new ones. “We’re not there to sign a contract, but bring back relationships to our airport, and industry.”

Crump, who said it was his first time attending Farnborough, said the “entire event was like drinking through a firehose. There is so much aviation and aerospace there that it is difficult to even explain it.”

But his biggest takeaway was something he was first exposed to during a trip to the Paris Air Show last year. “Our aviation community in Central Florida needs to rally under a common banner and speak a common language – effectively brand ourselves as THE aviation destination for businesses looking to expand and capitalize on the huge growth in the aviation sector now and into the future. We have a great story to tell, and we need to get serious about formally packaging and marketing that. It was apparent that several economic regions and industry clusters have figured out how to do that effectively, and I learned a lot from their presentation and communication.”

Although he meets with many companies, Marin says he also likes to meet with chambers of commerce and EDOs because “they do provide opportunities both ways. For any company that wants to invest in the U.S., it’s likely they will start with a chamber’s international team or our national chamber. We want them to know we are seeking opportunities and we want to be global destination for business.”

“Other companies could benefit from coming to Polk County,” Marin says. “We have everything that’s needed. The more international aviation companies look at us, we’re getting a chance at promoting Polk County.” 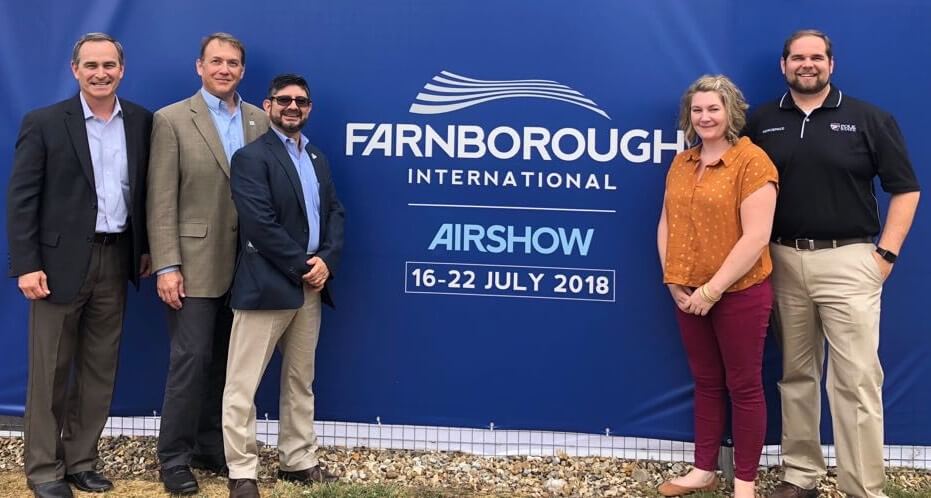