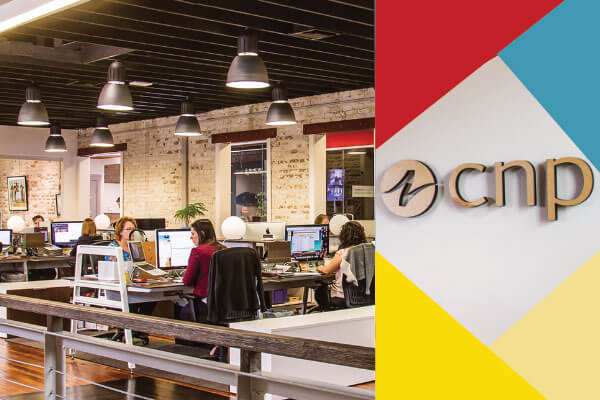 Anyone who traces the successful history of Clark/Nikdel/Powell back to its roots 25 years ago might quickly come to realize that the company has played an important role in local economic growth from the very beginning.

“The very beginning” was about 22 years before the Winter Haven-based advertising agency became a financial investor with the Central Florida Development Council, the county’s chief economic development organization.

The task of a full-service ad agency, after all, is to help its clients prosper and grow — through identity and brand development; strategic marketing campaigns; print, television and radio advertising; community promotions; website design and management; social media and e-mail marketing; and many other initiatives. CNP has been doing all of this for businesses and organizations throughout Central Florida and well beyond since Chris Nikdel and Jeff Clark launched the Clark/Nikdel company in 1991. (Anne Powell later joined the firm and became a business partner, producing the company’s current name.)

Individual business growth, aided by effective marketing, tends to contribute to community growth overall, so it’s not surprising to find economic development among the many threads in the work done by the creative team at CNP.

“Our involvement with the CFDC goes back 18 to 20 years or so,” says Alex Nikdel, the president and third partner of Clark/Nikdel/Powell and son of company co-founder Chris Nikdel. “We’ve done every website they’ve ever had, along with a lot of promotional campaigns and printed collateral.

“We’ve always believed in their cause, so when they (the CFDC) announced that they we’re going private, it was a natural move on our part to join them as an investor,” Alex Nikdel says. “It was a pretty natural state; it wasn’t a hard sell. We believe in the whole mindset behind the need for economic development in the area in general.”

Investments by companies, organizations and educational institutions will help to the replace the taxpayer dollars the CFDC has relied upon for support since the Polk County government created it as a public-private agency in 1985.

“What’s the next step? Maybe the United States of America EDC,” Nikdel says, placing no limits at all on the possibilities for future CNP business opportunities and challenges for its employees, who today number about 20.

As the staff has grown, so has the CNP office presence overlooking Central Park in downtown Winter Haven. Nikdel says the staff is in the final stages of settling into an additional 6,400 square feet of office space on the top floor of the two-story, 1920s-era building at Fourth Street and Avenue A, N.W. The expansion more than doubles the size of the office has had since 1999 and comes about a year and a half after CNP opened a satellite office in Orlando.

Nikdel describes the past five or six years as being a time of “crazy growth” in Polk County, using “crazy” in the most positive sense possible.

“We see it as being necessary and helpful to be at the forefront of that,” he says, further explaining CNP’s closer partnership with the CFDC.

Nikdel points to three recent and major Polk County developments as being catalysts for potentially unparalleled future business growth throughout the region. One is the LEGOLAND Florida theme park and resort in Winter Haven; the second is the CSX/Central Florida Intermodal Logistics Center, a rail/truck distribution hub also located in Winter Haven; and the third is the nearly year-old Florida Polytechnic University in northeast Lakeland.

“On the industrial side, the CSX Intermodal Center is going to have a huge impact, and it’s been great to see Florida Poly open and growing and having success in its first year,” Nikdel says, describing Florida’s newest state university as “the biggest economic development opportunity in my lifetime.”

“These are the biggest watershed projects in Polk County in a long, long time,” he says, “and it’s a nice diversity of industries — with LEGOLAND in tourism; CSX in distribution and manufacturing; and Florida Poly generating tech talent, bringing in new tech talent, and keeping what talent we have here.”

Nikdel expects a very bright future for the area around the eastern intersection of the Interstate 4 and the Polk Parkway, the site of Florida Poly.

“We see the university leading to research parks, different satellite research offices, and maybe an entrepreneurial startup community,” he says. “We also see it growing more tech sectors in our area.”

In addition to being CNP’s company liaison to the CFDC, Alex Nikdel is on the advisory for Catapult, a downtown Lakeland incubator for business entrepreneurs and project of the Lakeland Economic Development Council. Nikdel says the Catapult leaders are keeping an eye on Florida Poly and already recognizing it as “a good landing spot for a community of entrepreneurs.”

“New companies are focusing in on Polk County as a result of Florida Poly,” Nikdel says. “These are very good companies that people would want to see coming into the area, and I’m excited about that.”