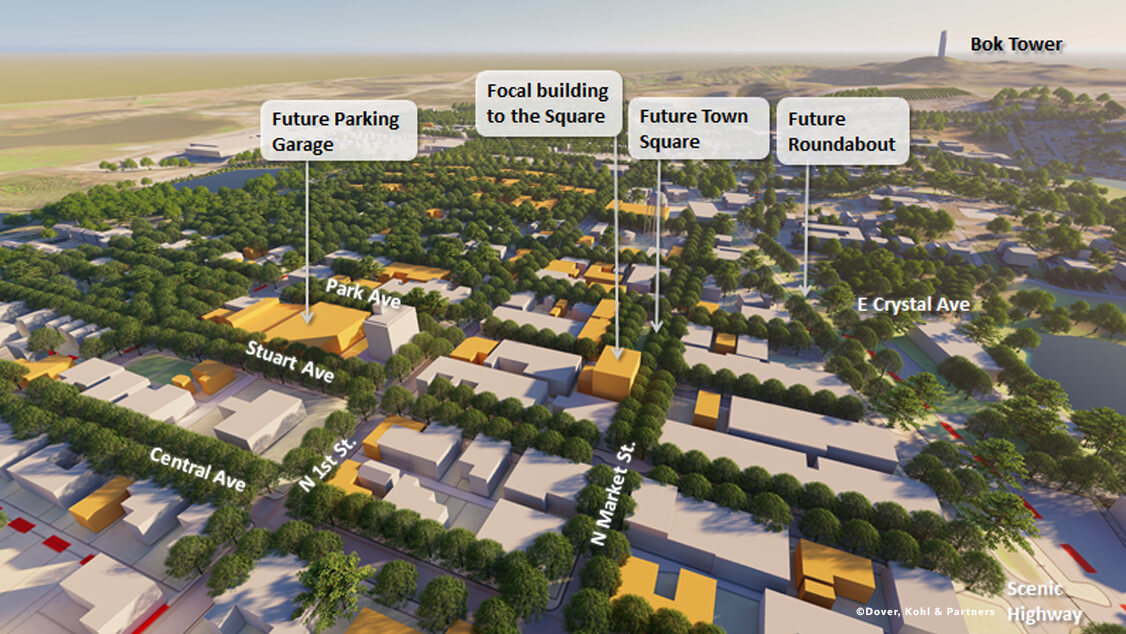 Everything is “connected” in Lake Wales, part of a process that started in 2019 and is flourishing today.

“We have a lot of new development. It’s at historic levels that have never been seen before in Lake Wales. It’s exciting – the opportunity that growth brings,” said City Manager James Slaton.

The city’s redeveloping its historic core and transforming everything from downtown to residential neighborhoods as part of “Lake Wales Connected.”

“We are re-establishing Frederick Law Olmsted’s original vision of this town and creating a ‘City in a Garden,’ ” Slaton said. “We are the only city in the state that Olmsted Jr. designed. We’re picking up where the city left off, probably around the Great Depression, and implementing his original vision.”

Lake Wales was originally intended to be a “City in a Garden,” and city leaders hired Olmsted in 1929 to design a master plan that included tree-lined streets and trails that connected parks and area establishments. Today’s “Connected” plan goes further, including a new town square, trails and bike paths to unify city neighborhoods, sidewalks and affordable housing.

Lake Wales is in the process of finalizing an $18.5 million bond for Lake Wales Connected, Slaton said. It includes:

“We are unique among all the cities in the county. We’ve got a charm and character unique to our city, and we are building upon that with our redevelopment effort and award-winning Lake Wales Connected project,” Slaton said. The project has won awards from the American Planning Association and Florida Redevelopment Association.

Residential growth is leading the way in terms of growth, Slaton said. “We have several large-scale developments in various stages of the planning process. The first have only recently broken ground, so this will be going on for the foreseeable future.”

Like many cities, Lake Wales has been working hard to attract retail and industry, but nothing has come to fruition yet, Slaton said. “We are working side by side with the chamber and chasing every lead we can. We meet with everyone and explore their opportunities for success in Lake Wales.”

It’s pursuing opportunities while dealing with a challenge: Some local residents don’t want the city to grow and change.

Growth also has financial implications. The impact fees the city collects are invested in the city to “create big-city amenities residents want to help improve their quality of life. Residents want to be a small city doing big-city things.”

After staying stagnant, with virtually no growth, for the last 20 years, Lake Wales is preparing for its future in every way, including its infrastructure.

“I think from an infrastructure standpoint, Lake Wales is in good shape in terms of having capacity in place to deal with the growth,” Slaton said. “Our first challenge point will be dealing with increased levels of transportation/traffic. Our major arterial roads are owned by the county, and we are working with them to plan for the future.”

As the city plans to expand its city limits, it is undergoing a land-use study “to determine what we want to do as a tool to guide good development. We’re looking at all areas within our utility service area beyond our city limits, in unincorporated Polk County.”

As part of that process, the city will be working with all stakeholders over the next year, including county residents, to see what the surrounding community wants to see in Lake Wales. “We want to engage the county in a planning agreement so we can do it cooperatively and collaboratively.”

The city has natural draws, such as Bok Tower Gardens and the Lake Wales Municipal Airport, which is home to two skydiving centers. The airport is also replacing its fuel facility. “This new enhancement to the airport is going to attract larger jets to the city, helping to expand the city’s efforts and economic development,” Shay Irvis said on a city video.

As the city continues to grow, Slaton is prepared for the next five to 10  years. “We’re going to be successful in redeveloping downtown and establishing the ‘City in a Garden.’ We’ll have big-city amenities, parks and recreation, and trails. And we’ll have enhanced and expanded commercial and retail.”