News
Home News Four Reasons Why You Should Care about Aviation in Polk
Go back to Blog page.

Four Reasons Why You Should Care about Aviation in Polk

From blue skies to busy regional airports to education, Polk County and Central Florida have everything needed to ensure aviation remains an important part of our economy.

“It’s a very critical aspect of what we are and who we are,” says Javier Marin, director of business development and global trade for the Central Florida Development Council.

Marin and five others attended the Farnborough Airshow in Hampshire, England, for three days in mid-July. The airshow is billed as the “most important aviation industry trade show of the year.”

Aviation and aerospace are growing industries globally, says H.D. “Jake” Polumbo Jr., a retired Air Force major general and partner in Two Blue Aces who attended the Farnborough show. He cites several reasons: “There’s a significant world-wide shortage of pilots in both the commercial sector and in the military. Because of that, any region of the U.S. — and particularly those regions with good airports and flying weather — will likely benefit from this huge demand if they are smart in the development of their programs and airports.”

Central Florida already has “95 percent of the solution to these problems already in place,” with its weather, airports and programs like the Central Florida Aerospace Academy, he says. “Not to mention terrific maintenance training, and logistics support and expertise, so there’s another reason for us to be optimistic.”

Eric Crump, who also attended the Farnborough air show as director of the aerospace program at Polk State College, says Polk County’s aviation history started before World War 2. “Our community was an important contributor to the effort to train pilots and maintenance technicians. Future astronauts and lawmakers were trained here in Polk. Our aviation history and industry contribution are beyond doubt. Today, we are the home to Sun ‘n Fun, the second-largest aviation event in North America, and we still value our roots in training men and women for exciting and profitable careers in aviation.”
Here’s more information on the top reasons why aviation is critical here.

Marin explains the county and region’s focus on aviation by focusing on the identities of each of the four airports in Polk County. Those are:

“Each airport has its own identity and we want to make sure we promote those,” Marin says.

Together, the airports contributed $353 million to the local economy, according to an August 2014 study by the Florida Department of Transportation. Another economic impact study, expected in February, should increase that number to $500 million, Marin says.

With numbers like that, it’s clear to see why aviation is critical to the Central Florida and Polk County region.

Aviation education is another big asset in Polk County, with 275 students at the Central Florida Air Academy in Lakeland and 250 in the Polk State aerospace program.

The Central Florida Air Academy trains students in high school. That’s critical, say Crump and CFAA director Keith Smith, because of a 2018 Boeing Pilot Outlook that shows a need for 790,000 more pilots in the next 20 years.

“There will be tremendous shortages in virtually all areas of the aviation industry, including pilots, electronics technicians, mechanics, airport personnel, air traffic controllers, etc. We are offering students in Polk County an opportunity to take advantage of these openings and reap the benefits of a rewarding career in aviation,” Smith says.

Some CFAA students join the workforce right out of high school, using the certificates they’ve earned in avionics, airframe and powerplant (maintenance), or drafting, he says. Most, however, go to college, attending Polk State, Embry-Riddle Aeronautical University, Florida Institute of Technology, the University of Florida, the University of Alabama, and the University of Central Florida. Graduates have found jobs as pilots, engineers, technicians and mechanics.

Crump says Polk State started its program “partially because the cost of pilot training had become so high while at the same time those clearly defined pathways from training to employment just weren’t apparent for most people. We developed a program centered around providing the absolute best-value possible – quality education and training that lead directly to employment. Students and families needed to see return on investment. Flight training, and maintenance training for that matter, are costly, both in money and time.”

Industry partners have provided input into what they want Polk State to teach, Crump said. “They were overwhelmingly receptive, and our partners have been instrumental in helping us build a valuable program that leads to better qualified candidates for them in the long run.”

Crump said 100 percent of the college’s aviation graduates have found jobs, and even though they may work around the world, many have remained in Polk County and Central Florida following graduation. “We are training our local workforce for great jobs that take them all over the world, but we also have the ability to retain that outstanding talent right here in our community.”

He said the relationships he made during the Farnborough trip will prove profitable for the college. “I’ve already identified several other upcoming events where I will have a chance to reconnect with these folks to continue discussions in areas like curriculum sharing and development, academic partnerships that could afford our students study-abroad experiences and potentially even internship opportunities,” Crump says.

The shuttle has been retired, but that’s not the end of the space program. In fact, Space X has launched more than half its payloads from Cape Canaveral, with others launching from Vandenberg Air Force Base in California. Its payloads include everything from supplies headed to the International Space Station to commercial and national security satellites.

“Space is still the next great frontier for the U.S., and the Space Coast is simply a couple hours away from Polk County,” says Polumbo, adding that “space exploration and travel is a huge growth industry for the state of Florida — so we in Polk County and Central Florida need to really leverage that.”

He also says the Air Force is trying to “Operationalize Space,” which means Florida Polytechnic should continue to use its STEM (science, technology, engineering and math) curriculum to “take advantage of the huge need for innovation and research in that arena. Poly will need to shift on the fly to react to the Pentagon’s needs.”

Florida Poly just announced a partnership with Draken International in which its students will develop technology and skills the company needs now.

With everything above happening right here, “Why wouldn’t we be bullish in the future of Polk’s aviation and aerospace opportunities?” Polumbo asks. 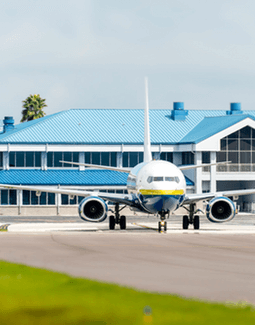