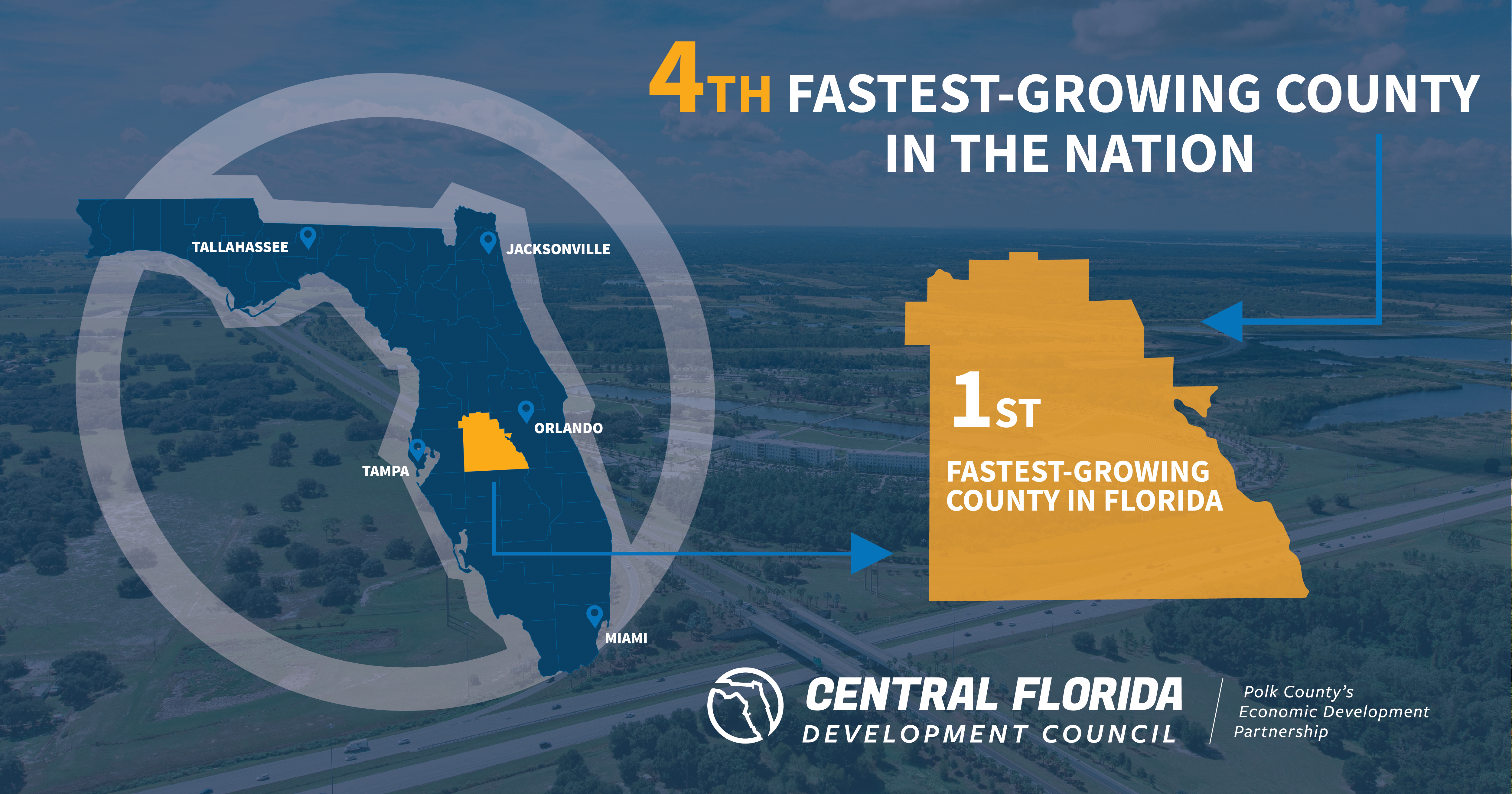 Polk County entered SiteSeer.com’s Top 15 fasting-growing metropolitan areas in the country between April 2021 and April 2022 in a big way, debuting at No. 4 with a 3.5% increase in population. It joins 13 other Sun Belt states in a list of the Top 20. The other six are in Idaho, Utah and Oregon, the website reported.

The U.S. Office of Management and Budget (OMB) defines a metro area as one that has at least one city with a population of 50,000 or higher. Lakeland fits that bill, with 112,64 residents in its city limits, according to the 2020 Census. Including people in the unincorporated areas surrounding it, the population swells to 358,000, according to a 2022 estimate cited on microtrends.net.

Along with that growth comes the jobs new residents seek.

Companies continue to locate here for a number of reasons, Malott and other community leaders agree, including:

“The secret of Polk County is certainly out of the bag,” said Sherrie Pratt, Communications coordinator for Central Florida Health Care. “Despite the rising cost of living here, Polk County is still more affordable than most places across the country. Its central location to urban cities, beaches and theme parks remains a drawing factor, and there’s more economic opportunity locally for people to work, plant roots and raise families. Though it’s growing, there is still somewhat of a small-town feel.”

Todd Dantzler, a former chair of the CFDC board and Board of County Commissioners, and current managing director at SVN | Saunders Ralston Dantzler, said politics likely play a part in growth. “We always have migration into Florida because of our climate and cost of living, but I think there are some politics playing into it. People are tired of where they are from.”

In addition, he said, manufacturers, warehouses and distribution centers are being located here because there are about 18 million people within three hours, reducing the time to market. “We’ve done a good job recruiting manufacturing.”

Along with growth comes a renewed focus on infrastructure. Leaders 15-20 years ago had the vision to update all sorts of infrastructure needs, but growth has surpassed those improvements, Dantzler said. “I wonder how bad it would be if they hadn’t done that. Do you build roads like a church – to handle the number of people who attend only on Christmas and Easter, or all year? Should you build roads to handle rush-hour traffic? It’s a balancing act.”

Malott said growth is hard to keep up with, let alone try to stay ahead of it. “This level of growth is hard to sustain in general. It’s a challenge to stay ahead of infrastructure projects. It’s a high-quality challenge to have. We’re a popular, desirable destination to move to. There are more people working now than ever, and there are a lot of reasons for people to be out in their vehicles, and there are more trucks on the road. These are all parts of a thriving economy. They’re also frustration points for people.

“We need to think beyond widening roads; we’re never going to widen them enough. So, how can we make it so people can ride their bike to the grocery store? What are other ways to have mobility? Those have not really been part of the conversation.”

Dantzler describes growth as consistent. “Development is still coming. Growth is here and we will figure out how to manage it. I’m confident leadership will figure it out. There will be short tempers from time to time as people are stuck on highways like Interstate 4 or U.S. 27. It’s not a failure to plan, but we must do it now – people are not going away. How can we assimilate new residents into our infrastructure capacity?”

Angela Garcia Falconetti, president of Polk State College and also a former CFDC chair, said, “Polk County is attractive to industry because of its centralized location, highly skilled talent pipeline and the ability for industry partners such as Polk State College to provide customized training solutions to meet specific workforce needs.” She cited examples from her college, including:

In the next decade, Florida projects nearly 17,000 new jobs within a 10-mile radius of a new campus Polk State is building in the Haines City/Davenport area, she said. “Employers are relying on a strong talent pipeline.”

Residential development has consumed northeast Polk County, Dantzler said. “There is so much planned and permitted; we will have to figure out how to move people through.”

Even with inflation, residential business is doing well, he said. And that will remain the case, even in the recession we are currently in (defined as a fall in gross domestic product for two consecutive quarters). “People need houses, grocery stores, drug stores, sandwich shops. As people come, our commercial development will follow.”

Last year, Saunders Ralston Dantzer was ranked as the No. 1 franchise in SVN worldwide. “It was our best year ever, and this year we’re already ahead of that. It’s a wonderful time to be in the commercial and land business on the brokerage side.”

Still, he sees a slight delay in decision-making. “Some developers are taking a look at projects in the pipeline. If it’s an A or B project, they’re probably sticking with the deal; if it’s a C or D project, they are pulling their wings in a little bit. They are either walking away or getting an extension of time.”

Every major health care institution is looking to have a facility within the Polk County area, Malott said. “That sector continues to be a really important driver of the economy.”

As industry booms “with the help of companies like Publix, Amazon, Geico and Chewy, and more people move to the area, there’s now a need to hire more educators, health workers, law enforcement, etc.,” Pratt said. “Legoland also draws families from all over the world and provides opportunities in a variety of positions.”

New residents, and snowbirds who decide to stay in Polk County full time, have affected her company and health care in general, she said, including waiting longer to see a health provider. “There have been hospital expansions, … and Central Florida Health Care recently opened its 15th community health center in Davenport because of the influx in new residents and the need for health care services.”

Manufacturers are looking to build facilities in Polk County – the CFDC gets more requests from them than anyone else right now, Malott said. But as the economy has cooled slightly, many have delayed decisions.

“We continue to market our location to manufacturers, who want to be in a market with the most efficiencies, like an established supply chain and a way to get their products to end-users,” Malott said.

Land along I-4 is referred to as “beachfront” property because demand and prices are higher. But there’s plenty of land elsewhere, especially as you move south, Malott said. “That land will become more popular as prices along the interstate continue to climb,” he said. It includes 8 million square feet of developable space at the Intermodal Logistics Center in Winter Haven.

Companies seeking to locate in Polk County are offering valuable job growth, he said, and “improving our community’s economic prosperity and providing higher quality of life for our residents.”

Pratt said progress is underway, and people are noticing. “Polk County is becoming a place where you don’t need to venture far away from home if you don’t want to or can’t afford to. Everything is at your fingertips: the workplace, amazing restaurants, outdoor and indoor recreation, history, and ambiance.”

And it’s not ending anytime soon. “It’s a situation that should be monitored closely. One thing that should be considered is sustainability. Can salaries keep up with the cost of living? Should moratoriums be considered for residential areas starting to exceed limits? Careful planning is necessary, and now is the time local leaders and organizations need to work together on finding the best way to grow and shape the future of Polk County.”