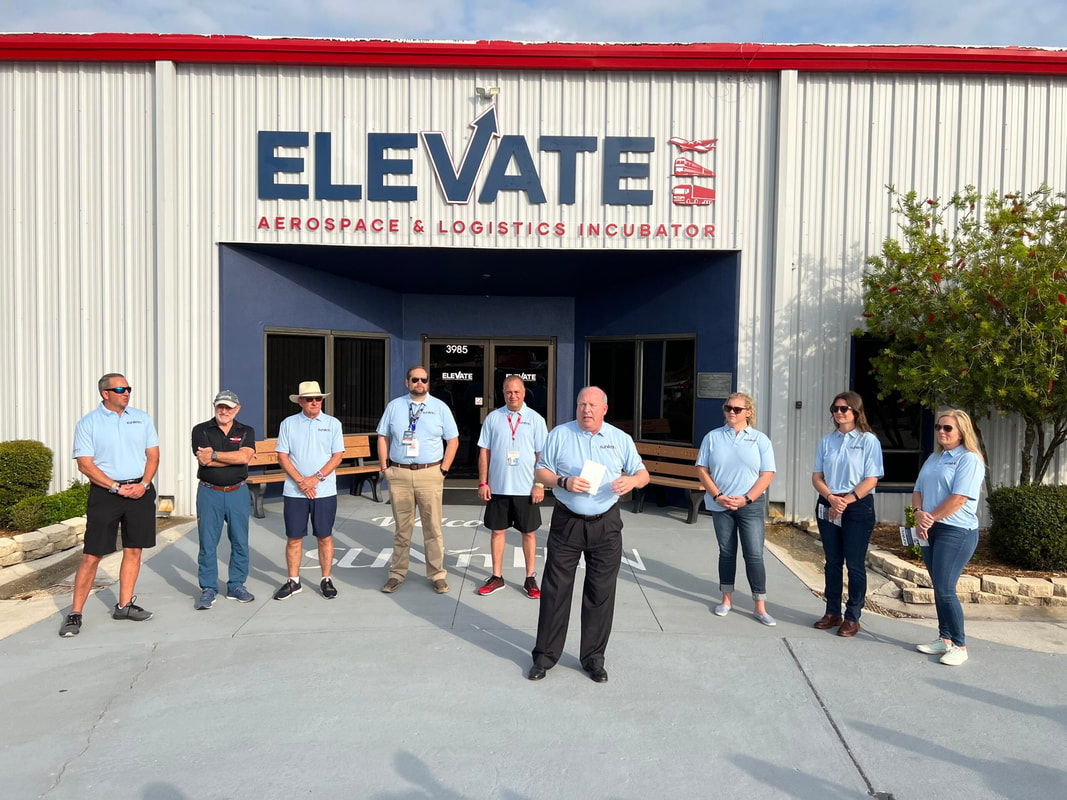 Almost a decade ago, Rick Garcia had a dream to open an incubator dedicated to aerospace and logistics. He wanted to give people a shot at innovating in a safe space. The timing and location never worked out. But now, as part of a collaborative effort, he is seeing that vision become a reality as ELEVATE Aerospace & Logistics Incubator welcomes its first tenants.

Garcia, the owner of Gulf Coast Avionics and chair of the CFDC’s Aviation Committee, said the incubator has been a dream of his. He is also chairman of the board of the Aerospace Center for Excellence (ACE), which houses the SUN ’n FUN Aerospace Expo. “We got the right group of people and the facilities to do it in. If you want to create your own business you can do it now.”

Garcia knows from experience: He borrowed money from his parents when he was 24 to start his company. “Thirty-eight years later, look at where I am now.”

Eric Crump is the executive director of ACE as well as an adjunct faculty member for the aerospace program at Polk State College. A month into his new job, he’s busy finding tenants and tending to details at ELEVATE, which opened its doors and welcomed its first tenant in June 2022.

According to its website, ELEVATE is a “world-class think-space purposefully designed to foster creativity and innovation in the transportation industry, specifically in aerospace and logistics.” Transportation includes planes, trains and trucks.

The incubator is much like Catapult, developed to offer resources, education, community, and space, that the Lakeland Economic Development Council started assisting entrepreneurs wanting to launch a product or start a business, or both. Catapult helped educate the county about incubators, which has helped ELEVATE, Crump said.

ELEVATE was started with a $600,000 grant Polk County provided to ACE, which is the custodian of the money and owns and operates the facility. Lakeland Linder International Airport committed $100,000 a year over the next three years as well. In addition, ELEVATE is partnering with Polk State College.

“The real benefit to the community is when the community is at the table. There are multiple voices in the room talking about this program, and that’s where the ideas come from,” Crump said. The end goal is to encourage innovation and retain talent.

The incubator is critically important to Polk County, where aerospace/aviation and logistics are targeted industries.

“With all the logistics we have going on, starting at the airport with Amazon, and SaddleCreek, all the warehouses, aerospace companies and others at the airports, it makes sense to increase the businesses and employment in this county,” Garcia said. “We didn’t have an incubator that addressed aerospace. Compare that with surrounding areas; Orlando has 20 and Tampa has 10 to 15.”

Crump said everybody loves overnight and two-day shipping these days. That doesn’t exist without airplanes. “Aerospace has an aeronautics and space component. They are very interrelated. Amazon is flying drones. Is it a logistics or an aerospace company? Airbus is building autonomous blimps that can carry cargo around the world. To me, those lines have blurred in the last 10 to 20 years. Technology bridges both areas.”

Similarities also include things like scheduling, inventory and personnel management, as well as things in the future like automation, he said. “Aviation is a component of logistics.”

Members can enjoy a dedicated “think tank” with floor-to-ceiling dry erase walls, a video-enabled conference room and high-speed internet. “You come in, gain what information you need, learn and grow. We want to help you build a business and then help you rent space and be a part of the business community.”

One tenant has signed up so far, and another will start in a couple of weeks, Crump said. “There are a whole bunch circling the wagons. We announced this at SUN ‘n FUN because the entire aviation community was here, as was the press to tell our story. We had 23 requests for membership as a result.”

He’s following up with those who are interested, asking questions about their timeline, what they are doing and more. “We are not cheap office space. We want to recruit the right people and build a mentor network so if someone comes in and says, ‘I have this really cool idea but I’m not good at finance’ we can connect them with a finance person.”

The minimum age to join is 16. Members must meet goals to remain active.

Members can stay up to a year; after that, a committee will review their project. “If they’re still waiting on venture capital, we can help work on that. If they still don’t have a business plan, we will say goodbye and if we’re full, we’ll be more selective. The community becomes self-policing. You need to work together, find a way to move each other forward. Our goal is to provide the space and access to mentors and education if that’s your goal. We’re not going to show up and write your business plan.”

Crump expects some members will join right out of high school while others will be working but lack a college degree. This, he says, is why the alignment with Polk State College is so important.

“They have an idea but no formal education. We will provide them the opportunity to build their idea and their experience base at the same time. The traditional model is people go to college for two to four years when they have no ideas. Then they start working for a company. They may be 40 before they have any ideas. It’s totally possible to work, get an education and innovate at the same time.”

Why does Silicon Valley have so many startups? he asked. “It’s because it has so many incubators. Elon Musk dropped out of Stanford University to innovate. He started his own business. You can do these simultaneously.”

In addition, the staff running ELEVATE will be paid interns from Polk State College. “The intent is to provide an opportunity for people in business, aerospace and logistics programs to be in a think-tank environment while making money as an intern.”

Polk State President Angela Garcia Falconetti said in a press release that ELEVATE “is a powerful extension of Polk County’s thriving aerospace community. [It] will accelerate the future of the industry and our region forward. With the opportunity for ELEVATE members to articulate college credits to Polk State, participants will be positioned to build upon both their education and entrepreneurial endeavors, fostering their success.”

Crump said: “Our long-term goal is to have people from the college come over and sit in the corner office one day a week. We’ll grow into that. What we’re saying is, let’s partner where it makes sense. This makes sense: Polk State doesn’t have to pay staff to have an internal incubator.”

The goal of ELEVATE is to develop great talent in Polk County. “That’s why the county saw the reason to put up the money for it. It’s not a flash-in-the-pan idea. It won’t benefit just anyone; it’s for the county. As target sectors for Polk County, this program represents additional investment supporting these important industries.”

ELEVATE already has four mentors – two in the aviation field, a CPA and a lawyer. Some, like SUN ’n FUN CFO Tracy Neal, have committed to answering questions for 30 minutes a week while others, like lawyer Adam Patton, will connect budding entrepreneurs with lawyers who can be of help. Others are welcome to join.

There are success stories already, but they’re not being told, Crump said. “There’s a student at the Central Florida Aerospace Academy – at 16 she built her own drone business. Every weekend she’s out doing work for real estate companies. These stories are there. It’s some of the stuff we’re missing. We see big companies coming to Polk County. We’re missing some of these awesome achievements that will become big businesses later. We want to help tell their story.”

Garcia said he thinks ELEVATE will take off, and they already have drawings for a new building that will accommodate Traviss Technical College’s Airframe and Powerplant program. “There’s a tremendous demand for aircraft mechanics. This building will allow students to work on airplanes in a hangar and have dorms where students can stay.”

He plans a capital campaign to fund the second building.

ELEVATE Aerospace & Logistics Incubator is currently accepting applications for membership. Memberships provide supportive mentorship and a creative, collaborative environment where companies and individuals can contribute purposefully toward the aerospace and transportation industries. Memberships cost between $50 for a virtual membership and $250 for your own private office in the building at 3985 Laird Blvd. in Lakeland.