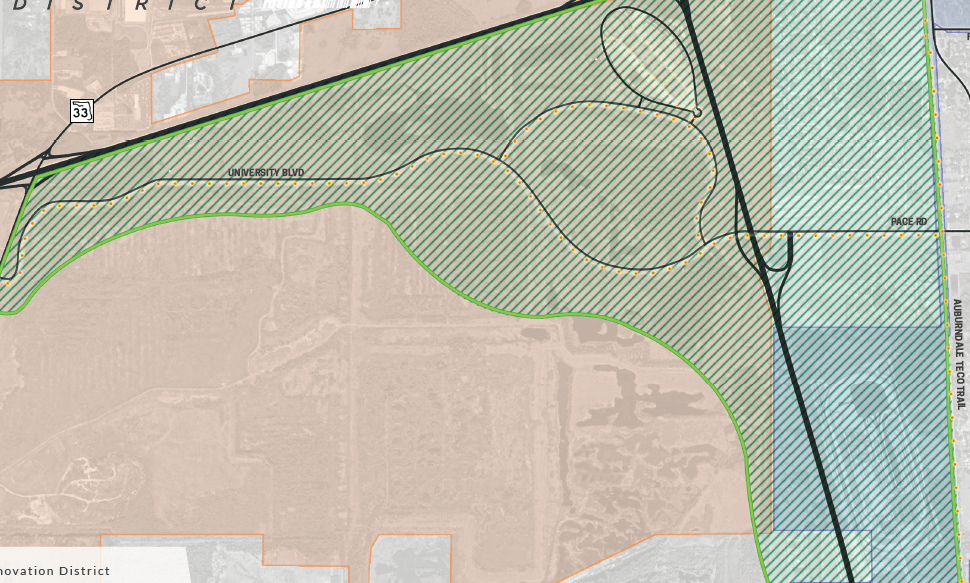 “Collaboration and coordination are key to both the establishment of a vision for the Innovation District and the realization of that vision,” said Teresa Maio, a manager in the city of Lakeland’s Community and Economic Development division. “From the public perspective, the district extends across jurisdictional boundaries, and rather than creating limits, it joins together key assets from within each of the local governments.”

Under the MOU, the cities and county will collaborate with landowners and stakeholders to develop the Central Florida Innovation District. The district provides the area an opportunity to diversify its economy, building upon the cutting-edge technology being developed and tested at Florida Polytechnic University and SunTrax, the Florida Turnpike Enterprise’s new 475-acre testing facility along the Polk Parkway.

Sean Malott, president and CEO of CFDC states, “the effort represents a concerted multi-jurisdictional approach to create a new community that welcomes the knowledge economy, fosters an ecosystem for innovation and values proximity, connectivity and collaboration. It’s not Lakeland, Auburndale or Polk County….it’s the innovation district.”

“As a result, our land-use policies need to be consistent in order to encourage and guide future development that supports the vision,” Maio said. “This means working alongside the other local governments, the CFDC, the university, SunTrax and major landowners to identify common goals and create the framework for a cohesive district to increase economic development opportunities for all involved.”

Julie Fife, a manager in the Office of Planning & Development for Polk County, said there has already been a significant public investment in Florida Poly and SunTrax.

“The goal is to implement a shared vision of economic growth based on innovation and research,” Fife said. “The MOU is just the first step in creating this cohesive vision and showcasing the best of what Polk County has to offer. The transformational technologies being developed at Florida Poly and SunTrax can translate into high-tech industries and jobs here in Polk County.”

Tim Hoeft, managing principal of Straughn Trout Architects, and Brad Lunz, president of The Lunz Group, were commissioned to collaborate on a plan to design the vision for the district.

“We looked at the district in a new way,” Lunz said. “We’ve identified a series of catalysts within the Innovation District and created a boundary map with potential uses with a series of visual vignettes that set expectations on what this district could look like long term, in 20 to 25 years.”

Hoeft said the development goal for the area is to maximize investment synergies and community values along the high-tech I-4 corridor.

“With the potential of high-speed rail coming down the corridor, the district will serve the greater Central Florida area,” Hoeft said. “This area will become developed in one way or another, so it’s imperative to collaborate and align a collective stakeholder vision for ultimate benefit.”

That includes ensuring the plan is complementary to growth in Auburndale, Lakeland and the county, he said.

Like Lunz, Hoeft is a Polk County native, having grown up in Auburndale and now living in Lakeland.

“There’s hometown excitement about this, little things can make a big impact. I want to help shape it as we move forward,” he said. “Florida Poly and SunTrax are innovation and research-focused, it’s really a different type of setting for us locally. This is our opportunity to shape Polk County’s innovation hub, we need to make the most of it and do it right.”

“It’s an idea to direct focus in that area in hopes we can raise the bar a little bit and take advantage of those two very key elements,” meaning Florida Poly and SunTrax.

Lindsey said this hasn’t been done anywhere else because some places, like Centennial Campus at North Carolina State University, were given the land upon which to develop their research park.

“There are a dozen or more individual property owners that have different needs, objectives, desires,” Lindsey said. “We set the tone. Working together, this can enhance the entire area. This is going to be a challenge. The objective and goal is the same (as other research oriented areas), and the parts and pieces are there if we can guide the process.”

But it won’t happen overnight, he said.

And that’s okay, said Amy Palmer, director of community development in Auburndale, because everyone involved is shooting for something better. In Auburndale’s case, the city wants to ensure the Innovation District and the Lakes District it is developing complement each other.

It all comes down to looking at the big picture, she said, and that’s where the MOU comes into play. 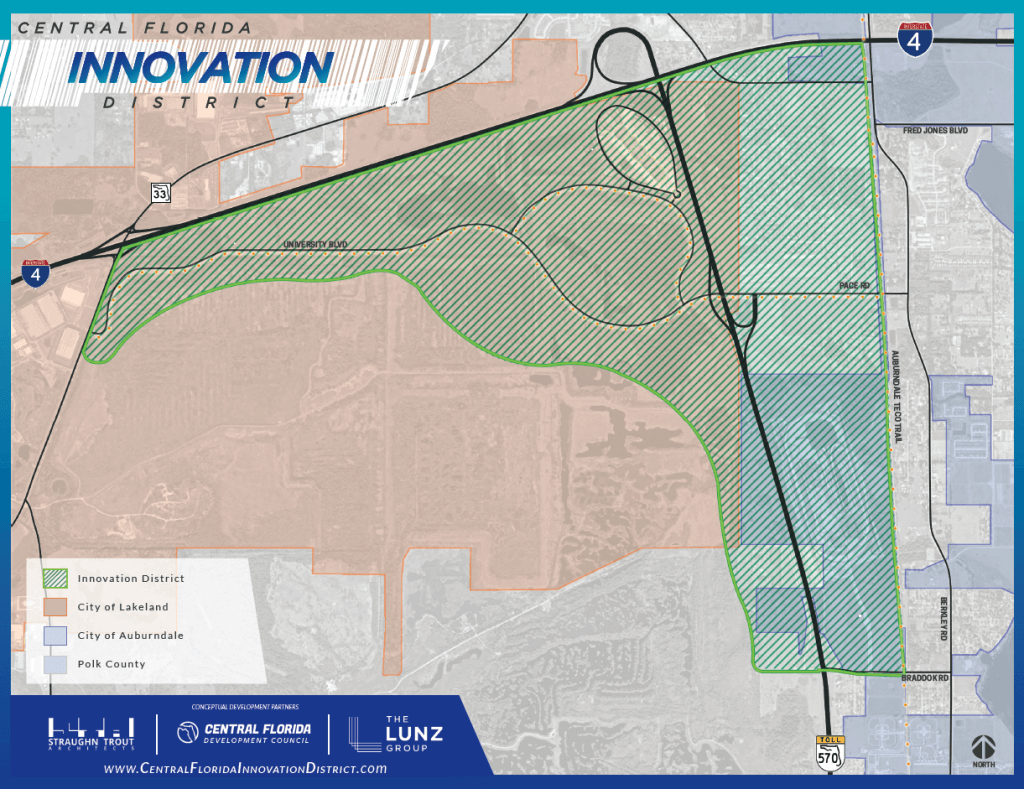